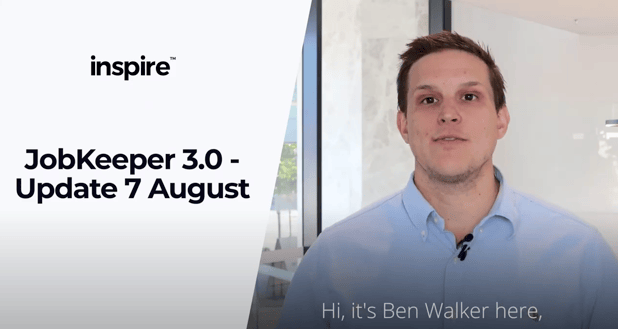 Last week we hosted a JobKeeper 2.0 webinar. In that webinar, we shared that to be eligible for the JobKeeper extension, the June quarter of a business's turnover needed to be down compared to last year as well as the September quarter.
Now, on the 7th of August, which was last Friday, the government amended the rules that they've initially released on the 21st of July. So, our webinar is actually outdated already a week after it was released.
The distinction was, instead of the June and September quarters, it's now just the September quarter to be eligible for the first extension to JobKeeper.
What the test period for the March quarter next year will be, is only having a look at your December quarter - not what we originally said in that webinar.
The reason why they did that is because what happened in Victoria with a second round of lockdowns, is that we saw businesses take a hit from March, onwards. They might have picked back up towards June, July, and now they're going to take another hit. So, technically, a lot of Victorian businesses who've had to close again, wouldn't have been eligible for JobKeeper 2.0 under their original rules. So they've adjusted it and it's much more favourable to businesses and much more in the essence or in the spirit of what they've wanted to do here.
So here are the 3 key changes:
So these are the updates we wanted to share with you in case you haven't seen any sort of information since Friday the 7th of August, which is when they released these changes.
Keep an eye out for more details to come.