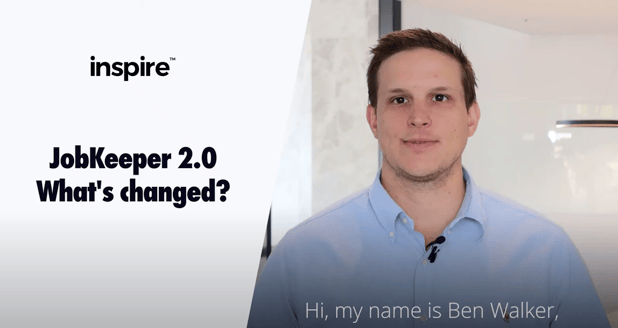 On the 21st of July, the federal government announced the extension of the JobKeeper Programme - they’re calling this JobKeeper 2.0.
Here are a few changes that are happening -
Extension to the JobKeeper Program
In terms of the timeline of the extensions, the first JobKeeper package ran from April through till September this year, which hasn’t finished yet. But, there's actually a two stage extension to the JobKeeper Programme. The first one is from the October to December quarter. The second is a three-month window from January to March next calendar year. All together, this is a further six month extension to the JobKeeper Programme.
Payment Rates
Payment rates will now depend on the hours that your employees worked.
If your employees worked more than 20 hours, and the test period was before March this year, their payment rate for the initial three-month extension drops down from $1,500 a fortnight down to $1,200 a fortnight. And for the second three-month extension, January to March next year, we'll see that drop down again to $1,000 a fortnight.
If they work less than 20 hours a week, the payment rate drops from $1,500 a fortnight down to $750 per fortnight for the October to December quarter - because they didn't account for hours that person worked. Then down to $650 a fortnight for January, February, March next year.
Test Period
The other significant change is the test periods. With JobKeeper 1.0, if you're eligible for a month-versus-month in the previous year or, quarter-versus-quarter, from that point that you were eligible, you're eligible for the initial six-month window regardless if your business picked up again. But with JobKeeper 2.0, these two three-month extensions will test your actual turnover.
Based on Actual Results
The initial release was on the 21st of July just as Victoria was going into their second round of lockdowns. The feedback was that it's actually not going to be great for Victorian businesses who had their initial hit. They’ve picked up and now they're down again because a lot of them wouldn't have been eligible for the second round.
What they've done is, for the October to December three-month window, you need to review your September quarter versus your September quarter last year and see if there's been a drop in turnover that way. We need to look at actual results now, not projected.
Alternative Testing
The second extension (January, February, March next year) you need to look at how your December quarter 2020 has gone, versus December quarter last year. They have flagged that there will be alternative tests.
Let's say you're a new business or you're a high growth business and comparing it to one year ago, the quarter doesn't quite work to actually look at the true impact on your business. So keep an eye out for the alternative tests for the JobKeeper 2.O, because they're yet to be released and, further detail around the 20-hour rule.
What does that mean for people who are on regular hours or maternity leave, or even business participants, the owner of the business? How does that work with the 20-hour rule? There's still a few details to emerge there. We're expecting late August or early September for these things to be clarified.
So let's get ready for JobKeeper 2.O, work out if you're eligible, and always reach out if you need a hand.
If you need to have a chat with an accountant book in a strategy call at https://inspire.business/chat