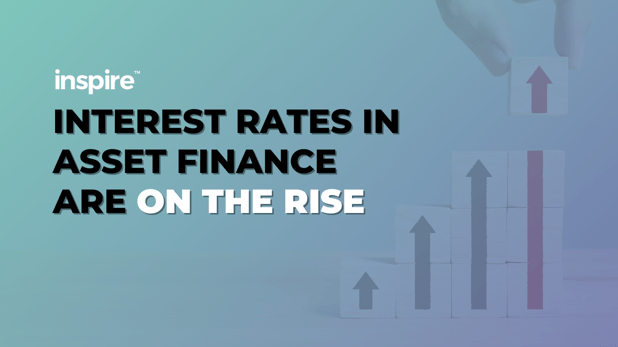 Interest Rates In Asset Finance Are On The Rise Traditionally I would say we’ve been in a declining rate market for between roughly six to eight years. Rates have been coming off, which is great news - everyone keeps being told to renegotiate their rates around home loans and all these other things.

The reality is, rates are pretty much as low as they're ever going to go - this is where we're at. We saw an increase in rates for 25 basis points earlier in 2021. Now the thing to remember with asset finances is they're fixed term fixed contracts, so typical terms would be three, four or five years - we don't write anything longer than five years as It's a poor outcome for the client, typically.

So what's happening is while the RBA is releasing data claiming to not be looking to a hike rates again until 2024, it has to be kept in mind that if you take out an asset finance deal now,with a view that it will end in five years from now taking you through to 2026, the rate will not be the same for the finance year. So what they need to do is they need to factor in essentially what they feel rates are - and without going into a full explanation around money markets and how banks acquire money and rates and all these things - but typically there's a yield curve, what we call the back end - so 5, 10, 15, 20 year rates and bonds where banks trade money to each other essentially.

The yield curve, as we would call it when, what we call bid, so it increased. And it increased in the back end in the 5, 10, 15 years space, purely because people know rates are going to increase. And actually, it hiked prior to that period - so started hiking in a two or three years space. It went up sooner than what the RBA is claiming that rates will increase. So whilst the RBA's saying they think it will go up in 2024, the banks don't believe that to be true. We are all expecting rates to hike sooner than that, and the reason behind that is because of a rapid decrease in unemployment, we’'re seeing it accelerating faster than we expected. We're seeing GDP shoot up faster than expected, and the economy is looking in much better shape than what we first thought.

Obviously tourism, retail and hospitality are industries that are still struggling and they're still rebounding, but if we look at construction infrastructure spending and all these other areas, that is rebounding rapidly. That, in turn, is creating positive market sentiment which in turn is driving an increase in interest rates.

Watch the full webinar on my e-learning page at https://learning.benwalker.com/courses/asset-finance