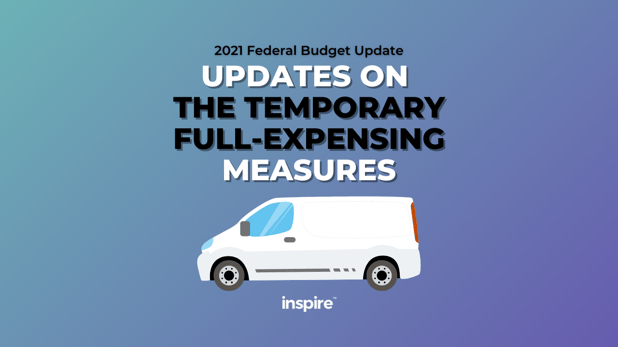 Essentially, what the government has brought in was the temporary full expensing of any assets that's purchased as a small business. If you've bought anything in terms of an asset, the threshold was $5 billion in turnover, which is massive! So it will cover quite a lot of the small businesses that we work with, if not all.

Essentially, it was supposed to finish in 2022 - they've extended that for another year, to 2023. After the 6th of October, if you bought the asset then, you'd be able to write off the full cost of that asset on your tax return. In terms of secondhand assets, it's still at $150,000 through to the 30th of June, at the end of this financial year.

What's cool about this is, a lot of people are investing more money into things such as equipment and cars, so that's kind of sprucing up the economy and they're seeing that that's working really well - so they're extending that for another year. However, that does mean that if you want to save tax in this financial year, you have to purchase the car ready for delivery before the 30th of June to claim for that - so in a month-and-a-half time. The car yards are pretty busy - your asset finance guys will probably run off his feet - so if you're thinking of doing that, make sure you get in touch with them as soon as possible. If not, you still have next financial year and the financial year after that to do that, as well.

Bear in mind, there's a bit of an asterisk here: If you do buy a car, this temporary full expensing doesn't have a limit if it's a business asset like a printer, equipment, or big machinery, or even commercial vans and vehicles. However if you buy a car like a sedan, there is a car limit depreciation, which limits the depreciation to $59,136. You want to make sure that you do take that into account when you do tax planning. Don't go out and buy a Lamborghini and think you can write that $200,000 Lamborghini off - there will be a limit on that and it's probably because of that example. We're not buying cars that is not producing income in the business.