The original article was published by the Chartered Accountants Australia New Zealand. Written by Bernard Kellerman and photography by Marcus Bell.

A Brisbane CA has created a café where small business owners can network as the centrepiece of his accounting practice.

And inspiration was needed as Walker rode the steepest of learning curves to reshape his workspace, placing a café as its centrepiece, and enlisting crowd funding to make it happen. While plenty of commercial office premises have a café downstairs and professional offices above, the two operations run by Walker are not independent of each other. He’s set it up so each one makes the other business more valuable.

“It’s been a massive disruptor, especially in an industry like accounting,” Walker says.

“It’s become a hub for small business owners to network. Other firms are now asking if they can run sessions in our meeting rooms, too.”

The evolution from idea to execution was rapid. Walker left a big four firm to start up a one-man accounting business in February 2013. Others joined him, and the new firm rapidly outgrew its serviced offices, leading Walker to search six months later for a more permanent base with space to grow.

It was a throwaway line from his mentor Paul Dunn, an ex-Hewlett Packard engineer turned global marketing guru, which first planted the idea.

“You know, I’ve always thought an accountant’s office is boring, too dry. Why don’t you set up a café as the centrepiece of the office?” Dunn suggested.

“From the tone of his voice, I figured he wasn’t joking,” says Walker.

But then, rather than the small café Dunn most likely had in mind, Walker came across an empty shell, a warehouse that had once been a furniture store, where adding a few walls would create large meeting rooms and open spaces as well as a café on the ground floor, with an open plan office above for his accounting business.

Walker needed what he said was “a crash course on commercial leasing” before he signed in October last year.

The brick walls weren’t the biggest obstacle to Walker’s ambitions to launch the café business on 6 December. There was the small matter of funding, and other sticking points, such as getting a liquor licence and finding the right staff.

“It’s learning on-the-fly,” he says.“It’s been an interesting journey and it’s made me feel more resourceful.”

The building owner offered a lease incentive towards the fit-out, but more was needed.

“Given that we were a growing accounting firm, we couldn’t just lash out for the full cost of the fit-out. But we had to find a way to make it work, we had a launch date and we didn’t want to have to put back the opening night. That’s why I turned to crowd funding, through a website called Indiegogo,” says Walker.

The site tapped a large community, although it was mainly clients, former colleagues and mentors who pitched in with funding. To sweeten the deal, Walker offered incentives such as prepaid credit at the café.

“We matched contributions dollar for dollar with credit for food and coffee once we were up and running, and had other options such as a ticket to the launch party as incentives.”

This netted Inspire CA “just shy of” $5000 which Walker says did go quickly, but took the edge off the expenses and added to an already growing client base.

Walker, who has never worked in hospitality, also had to find key staff – and hiring a great barista was top of his list.

“One thing my mentor, Paul Dunn, taught me was the power of language,” says Walker. “Our ad called for an EXCEPTIONAL BARISTA. On the page, it just stood out.”

The person who met the brief also had the drive to be more than just a barista. He has become the café manager, now known as the firm’s Chief Espresso Officer.

The idea is catching on says Walker. One of his accounting colleagues in New Zealand has been inspired to clear space in the shopfront of his own office to make room for a café machine and a barista.

“There’s also another accountant I know in Jersey who is looking to do the same thing. We’ve also launched some co-working space upstairs, to let other businesses lease a hot desk or some permanent working space.” 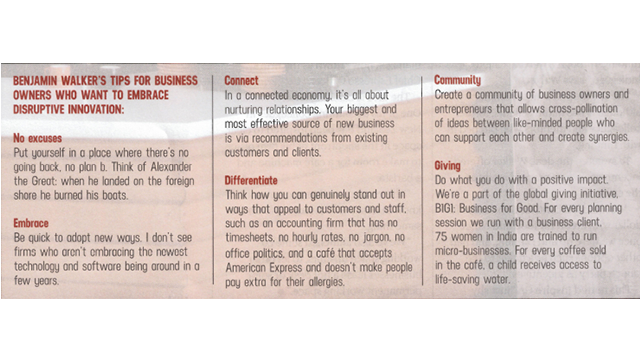 Put yourself in a place where there’s no going back, no plan b. Think of Alexander the Great: when he landed on the foreign shore he burned his boats.

Be quick to adopt new ways. I don’t see firms who aren’t embracing the newest technology and software being around in a few years.

In a connected economy, it’s all about nurturing relationships. Your biggest and most effective source of new business is via recommendations from existing customers and clients.

Think how you can genuinely stand out in ways that appeal to customers and staff, such as an accounting firm that has no timesheets, no hourly rates, no jargon, no office politics, and a café that accepts American Express and doesn’t make people pay extra for their allergies.

Create a community of business owners and entrepreneurs that allows cross-pollination of ideas between like-minded people who can support each other and create synergies.

Do what you do with a positive impact. We’re a part of the global giving initiative, B1G1: Business for Good. For every planning session we run with a business client, 75 women in India are trained to run micro-businesses. For every coffee sold in the café, a child receives access to life-saving water.